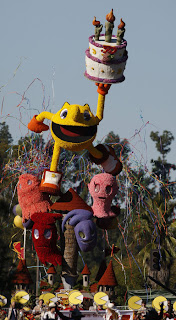 Even though I thought the actual date was earlier, Namco is declaring 2011 to be the 30th anniversary of Pac-man and to commemorate the event, they commissioned a towering likeness of the popular character for the 2011 Tournament of Roses parade. I must admit that I do not understand the significance of the castle or the grey candles, but hey, it's all fun. The float was preceded by a marching band with the familiar "pie wedge" icon covering the tubas.

My first encounter with Pac-man was in the late 70's when I saw a couple of girls playing a "cocktail" version of the game in a local arcade. They were thoroughly engrossed in it and what little I could see by peering over their shoulders caught my eye. It was a simple idea that was easy to grasp and instantly addictive. I was envious of other players who became experts at the game, because I could never get past the first few levels.

Coincidently, this weeks cartoon features the iconic videogame character. But I'm sure you've already enjoyed it and commented on it, right?