I am pleased to announce that the game I've been reporting in the series of design diaries is finished and ready to play! The game is called Crazy Quilt and you can play it in my game section here.

It took a little longer than I anticipated and it still has a few rough edges here and there, but I'm pleased with the overall results. Not only is it an attractive and playable game, but it has a little something extra to keep you going for more. I am especially pleased as it seems that little by little, my programming skills are catching up with my design skills. There's still a lot more I'd try to do if I knew how to program for it, but I'm happy with it so far. Enjoy.

As you may recall from part 2 of the design diary, I was implementing various features to make the game more interesting.

I tackled those over the last few days as time permitted. It was challenging mainly because the parts of the program I needed to amend were parts that I did not fully grasp at first. In fact, it took a lot of trial and error to find out what would give me the desired results. In retrospect, there were parts that I could have done much more efficiently. On the plus side, I've learned just a little bit more about the logic that went into this thing in the first place.

But that's all water under the bridge now. The program works as I intended it to. I had considered giving the game "Easy" and "Hard" settings, but I'm finding the easy to be too easy and the hard to be too hard - with no middle ground. So I may combine the two and start the game out easy and make it harder after a certain milestone is passed.

Now that the game works, it's time to put in the "bells and whistles." All of the things that make it pretty. That means replacing the temporary interface with a fancy one and putting in instructions and other useful feedback. Then, at last, I can publish! I hope you'll stick around for that. :)

Like most folks, I figured the WSJ had dropped using real artists in favor of using computer software for their iconic portraits. Watching this video was a pleasant surprise.

Illustration is not about the ink that's being put to paper, but knowing exactly where to put it. One can say much the same about any trade.

Welcome back to my somewhat amazing story about making a flash game. As you remember from part 1, I'm making a game inspired by my wife's patchwork quilt. On day one I created some art and made a working prototype. Now the hard work begins.

What's wrong?
The problem with the game as it stands now is that it doesn't do enough to hold the player's interest. To tackle that problem, I intend to do two things. First of all, I'm going to build in a system to make the game end sooner. I will also work in some bonuses that the player must actively seek in order to prevent that from happening. Both of these should increase player involvement so that they feel they have a more active role in the progress of the game. Will this work? There's only one way to find out.

Trying not to break it
This game is using an engine that I built when teaching myself Actionscript 3. Which means there are parts of it that are there because the book told me to put them there. To be fair, the book tried very hard to explain to me why it was important for these pieces to be there, but I'm not really the ideal student for that form of instruction. So here I am with code that works and now I have to pinpoint what's happening where so I can insert the parts I need to improve the game while keeping the whole thing working. The plus side of this is maybe I'll finally figure out what that book has been trying to teach me all this time.

The best way to do this is to use the Trace command. It's a function of Actionscript purely for debugging. The trace command simply sends your message to the output window exactly when you tell it to. This can tell you the value of a variable or even if the program is reaching that part of the code at all. In my case, I put in trace commands to tell me when it began processing matches and when it was done. I moved them around several times until I got the results I wanted and then I replaced those traces with commands that would increase bonuses for subsequent matches (combos).

A trickier part was to make the score display more exciting. Sure, you're earning points, but since it's getting added to the score in one large chunk, it's a bit anti-climatic. Far better to increment the score like old pinball machines used to do. This turned out to be far more difficult than I anticipated simply because I had little understanding of how Flash keeps track of time. I eventually had to scrap my initial plan for one that (fortunately) turned out to be far more efficient.

That took me most of the morning and while I still haven't addressed the improvements I wish to incorporate into the game, I now have a good idea on where they're going to go.

Hi folks and welcome to what I hope to be the first of many game design diaries. For the uninitiated, this is where I share my thoughts about the process as I bring a game from concept to completion.

Humble Beginnings
The first stage of any game begins with "what am I going to do?" In this case, I was inspired by the artwork in a quilt my wife had made and (as things usually work in my mind) I thought about how one might incorporate that art into a game - specifically one that a so-so programmer such as myself might make. I eventually decided on something similar to the "match-three" gameplay made popular in "Bejeweled."

The next step would normally be to create some rough components to make a test game out of, but since I already had basic code from the time I was teaching myself Actionscript 3, I was ready to proceed to the next step and make some more finished looking pieces for my game. As I didn't want to steal the hard work of any quilters out there, I had to come up with my own art based on what I determined to be traditional quilt blocks. I built these in Photoshop and applied fabric patterns to them so they'd look more authentic. I also added a bit of a bevel to the elements to imitate the "puffiness" of the quilted fabric. As the blocks were going to be small, I didn't spend too much time on making them look realistic.

Then it was only a matter of putting the art into my old code and making adjustments so the final display looked like an actual patchwork quilt. Success! The game worked! However, (as I predicted) it doesn't take long for the game to progress from "this is fun" to "dear lord, please let this agony end!" That's the next step. For some reason, a Batman franchise sounds a lot more interesting than a Subway franchise. Where do I sign up?
Read the Article at HuffingtonPost
posted by Kyle Miller  # 12:12 PM 0 Comments

Bug squashing and other site repairs. 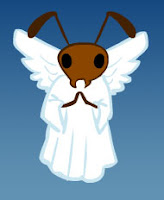 I hope everyone is enjoying the new and improved Gamecreature website. There are nearly 6000 games to play on the site. There is no problem with enjoying the games, but some of the other features, such as ranking the games and saving the high scores still does not function as it should. Do not worry, the team is looking for solutions to these problems and you can still enjoy the games while doing so. Thank you for your patience.
posted by Kyle Miller  # 10:22 AM 0 Comments

In case you missed it, Jon Stewart and Stephen Colbert got into a discussion regarding the uses of Corbomite in front of a live audience on Saturday, October 30, 2010. Folks like myself know that Corbomite was a bluff used by Captain Kirk in an early episode of Star Trek.

Sure, the exchange was scripted, but I found it amusing that the writers believed that such a deep discussion of obscure trivia would work. Turns out, they were right.