Not even pizza is safe from the Federation

From Think Geek.com, the Enterprise pizza cutter! Almost makes me wish I could eat wheat so I'd have an excuse to own this wonderful blend of pop culture and kitchen necessity! 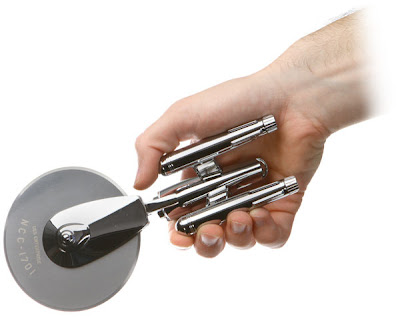 Now you no longer have an excuse to visit one of the great museums in your area. Saturday, September 25th is Museum day. Museum day is an annual event that is organized by the Smithsonian and features free admission to select museums across the country. Go to the official site to find a museum near you and to print out a ticket that will allow you and a guest to visit the museum of your choice for free! At last, a version of Left 4 Dead that I'd want to play!

I wasn't motivated to read the Pride and Prejudice zombie books, but this one might make it to my reading list.
Read the Article at HuffingtonPost
posted by Kyle Miller  # 11:12 AM 0 Comments

My first introduction to Mario was in an arcade game called Donkey Kong. Then I met his brother Luigi in the Mario Bros. arcade game. I did not own a Nintendo or Super Nintendo game system, so I missed out on some of Mario's early entries into the home market. Perhaps if I did, I'd be better at the game than I am now. Even more interesting than what has changed over the years is what has stayed the same.

Did Board Games Help Cause the Recession? I am sure Rohit Chopra's article was written with tongue firmly in cheek. After all, the Game of Life was originally invented in 1860 and while in some areas it has been updated to keep up with the times (the version we're all familiar with made its debut in 1960) it is still a very simplified simulation of one's travel down the "road" of life. Monopoly was invented in 1903 and it was actually created as an object lesson in the dangers of concentrating land in private monopolies. Indeed, as the game progresses, it becomes less and less fun for those who are trying to play catch up.

The same could be said for Scrabble. To me, there is nothing more frustrating than sitting across the table from someone who has somehow managed to memorize the entire dictionary. What's more, games can drag on for hours and there are few opportunities to win once another player has captured a commanding lead. That's why my word game of choice is the recently released Nab-it, from Hasbro.
Read the Article at HuffingtonPost
posted by Kyle Miller  # 9:02 AM 0 Comments 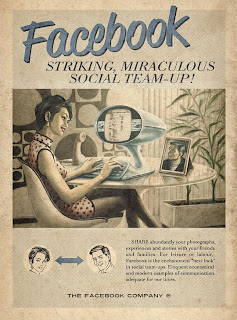 They don't make 'em like they used to, but if they did, I think these capture the look perfectly. According to Design Mom, they come from a Sao Paulo ad agency called Moma. My hat's off to them and to DM for unearthing these gems. It seems odd to increase the price of something that you WANT people to pay for, but maybe XBox Live Gold is SO successful that they need to push a few users away. Here's a thought. Increase the price, but each time a user experiences the red ring of death, Microsoft has to refund double the amount to the user. What do you think?
Read the Article at HuffingtonPost
posted by Kyle Miller  # 7:44 AM 0 Comments