What I want to know is if the woman had curly blond hair and had left three bowls of porridge out to cool before taking a walk.
Read the Article at HuffingtonPost
posted by Kyle Miller  # 1:39 PM 0 Comments That does it. I need to develop a social gaming company so I can sell it to Disney. Who's with me?
Read the Article at HuffingtonPost
posted by Kyle Miller  # 9:47 AM 0 Comments

More news from the San Diego Comic Con. As much as I'd like to see new episodes of Justice League, I'll be happy to settle for this. Young Justice.

Just the other day, I was wondering if they would be doing an update or remake of the classic Tron. Here's the answer. And what movie about video games would work if you didn't want to play it? Check it out.

Hard to believe it, but it looks like this one is finally coming out. Hope I have enough pennies saved up.

Trendsetters and the Goose that laid the Golden Egg 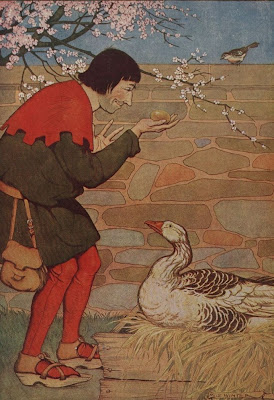 In today's corporate world, nothing seems to be valued and despised so much as the trendsetter. They're valued because they can create something new and unique that can instantly capture the public's imagination. They are despised because, by their nature, they are nonconformists. Trendsetters and their trends are the way they are because they are rebelious and don't conform to the focus groups and studies and general "stay inside the lines" approach that the corporate culture finds secure.

Remember the story of the Goose that laid the Golden Egg? It was an animal that, completely by surprise, laid eggs that were much more valuable than any other geese. Consider our trendsetter as such a goose. No one came to the trendsetter and told her to do such a thing - she just did it. What she did so delighted those in the corporate world that they lavished praise on her and asked her to do it again. So the goose laid three more golden eggs - each beautiful in their own right. But these new eggs did not please the corporate masters. Focus groups informed them that platinum eggs would be even more valued. Why can't the goose lay those? What's more, the eggs would reach the market better if they were less egg-shaped and more cube-like. Also, they were at risk of offending vegans. This confused the goose for she thought she was brought in for how well she made golden eggs, not vegan, platinum cubes. Try as she might, she could not give the corporate masters what they thought they needed. Because the goose could not conform, she was thrown out. And because the corporation could not adapt, their business failed.

I know this is a very silly example, but the point is that true innovation invariably comes from the rebels of this world, not from conformists marching lockstep and blindly following past trends. That's why we are buried in a world of remakes, revampings and sequels. Fortunately, trendsetters, by their nature, continue to appear on our landscape. The question we must ask is what must we do to foster their rebelious spirit instead of quashing it. There was a time when Stewart was too sick to host the Daily Show and Colbert took his place. After Colbert's "sick" episode on Monday, I thought Carell's introduction on Wednesday's episode of the Colbert Report meant the same thing. Leave it to this creative team to come up with something even funnier and more surreal. The back-stabbing "compliments" in the Even Steven segment were some of the best ever written. Keep up the good work, boys.
Read the Article at HuffingtonPost
posted by Kyle Miller  # 10:06 AM 0 Comments Funny how no one listens to game designers.
Read the Article at HuffingtonPost
posted by Kyle Miller  # 9:10 AM 0 Comments

Roger Ebert: 'I'd Sacrifice Every Video Game For The Works Of Shakespeare' Roger Ebert is a man who has been paid to have very strong opinions for decades. You think he's going to stop now? I personally enjoy books, plays, movies and video games and I don't anticipate anything is going to change that between now and the day I die. I've found the debate amusing to watch. Don't ever change, Roger.
Read the Article at HuffingtonPost
posted by Kyle Miller  # 8:36 AM 0 Comments

Nasa wants to send YOU to the moon!

Starting on July 6th, he National Aeronautics and Space Administration (NASA) is launching an online game where participants work on a simulated moonbase. The game is called Moonbase Alpha. Using the latest in gaming technology, this looks like just the thing for any potential space explorer. Check out the trailer below.

Roger Ebert Apologizes: 'I Was A Fool For Mentioning Video Games' (VIDEO) First of all, let me state for the record that I've been in the business of making games (of all kinds) for more than 20 years. But to determine whether or not video games can be art, well, that's a bit more difficult. Because first, you have to define what is art and that's a question that has occupied the world's greatest philosphers for centuries. Here's the answer as I see it. Art is something created by one individual as a message for others - something to get them to reflect upon themselves and the world they occupy. By that standard, yes, videogames can be art. But so can just about anything else, such as a men's urinal. But most of the time, games are not art - they are simply games - a means of entertainment. Just like watching a football game is entertaining. Even playing one with your friends. But even while some people may find beauty in the game, the intent of the players is not to create art - just to have fun. So I can understand where Mr. Ebert is coming from. As for art, well, I know what I like.
Read the Article at HuffingtonPost
posted by Kyle Miller  # 1:08 PM 0 Comments

A funny and well-made parody of the original Ghostbusters commercial (from the movie of the same name). I've got to admire their attention to detail, even replicating silent-era make-up.