It's the Great Pumpkin, GC

Now we see GC's solution to the candy shortage he created last week. Actually, this cartoon sort of created itself. When I was laying out the second panel, the use of these characters just sort of suggested themselves. (Yes, I know there are more holes in Charlie Brown's costume. I wanted to keep a few things different.)

This week's cartoon almost didn't make it as once again scanner difficulties reared its ugly head. This scanner has been faithfully serving me for the last few years and I hope it will last a few more. I don't really relish the choices in shopping for a new scanner that can handle A3 sized originals. It's a choice between the manufacturer of my current scanner and the competitors, all of which cost at least 10 times as much. SUre, it'd be nice to have a little extra support when I need it (the drivers haven't been updated in 4 years and the link to them is currently broken) but is that really worth $1800?

(Sorry about the delay: Having inexplicable problems with blogger this morning.)
posted by Kyle Miller  # 9:50 AM 3 Comments

It's that time of the year

Yep, Halloween is fast approaching and while we have the snacks, it's otherwise caught me offguard.

Does anyone want the exclusive Gamecreature pumpkin carving patterns? I meant to put them up, but my scanner broke over the weekend and I lost a lot of work time trying to get it fixed. So let me know and I'll see if I can get them online for you guys. At the very least, I should be able to show you a picture of last year's pumpkins.

Looks like this year's costume is going to be harried cartoonist...
posted by Kyle Miller  # 9:37 AM 1 Comments

Okay, so it wasn't really a sunny day. In fact, it was cold and we saw a little snow. But if it was, I'm not sure if GC would know what to do with himself. I've been so busy these days that when I finally got some free time, I don't know what to do with myself. Actually, the basement needs cleaning out. Hmmmm...

In case you guys weren't paying attention, I was the lead designer for the Family Guy video game that is due to hit store shelves this weekend. If you're a fan of the Family Guy TV show, I think you'll enjoy this game. And I'm not saying that just because my fragile self-esteem is totally wrapped up in the sales of this game... Anyway, if you're so inclined, pick up a copy or two. It's available on Xbox, PS2 and PSP platforms.

(P.S. The blog won't let me put a video on this page, so I put it on another page. Click here to see a video trailer for the game.)
posted by Kyle Miller  # 9:03 AM 2 Comments

Well, now we know what the dog does when nobody is looking. Actually, I'm counting on that mutt to support me in my old age. I'm sure the dog is better at picking stocks than I am.

I actually managed to make some progress in my growing backlog of work over the weekend and had a little time to lose myself in some new games.

The first is Mario vs. Donkey Kong 2: March of the Minis. I have to say that this game is a must-have for any owner of a Nintendo DS. To say it's a puzzle game is like saying Manhatten is an island. Both statements are true, but miss the depth of what's really going on. Take a little of the original Mario vs. Donkey Kong, throw in some fun from Lemmings and the classic Donkey Kong game and open up the full range of the DS touch screen capabilities and you've got an idea of what this game packs. It'll tickle your brain and make you smile. 'Nuff said.

I also got to play Heroscape, a three dimensional board game that just about anyone can play. 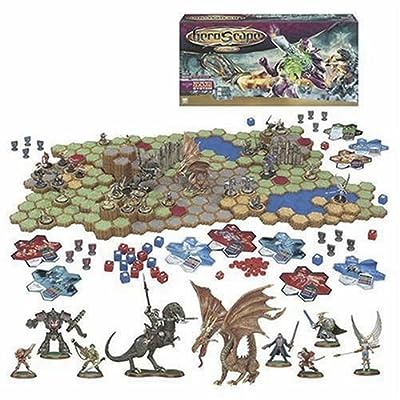 If you like your games in the real world, then this game might be for you. It looks a bit daunting at first, but it's really quite easy to set up and start playing. The concept is that there is an eternal war taking place in Vahalla, where fighting is what folks do for fun all day, but really, who needs to understand what's going on. Pick your army (choices go across the spectrum from Vikings to WWII Airborne to dragons and space-age robots) and see who wins. Of course, there's a plethora of add-on supplements including new armies (Colonial Minutemen and Cyborg Gorillas) and new terrain features. There's also an upcoming set featuring the Marvel Superheroes coming out next month. My wallet may never be the same...
posted by Kyle Miller  # 8:54 AM 0 Comments

Am I the only one with this problem? I think the big problem is that there still isn't furniture designed for the needs of the game hobbiest.

Recently I've been playing Pokemon Mystery Dungeon for the Nintendo DS. Because honestly, I just can't get enough of a good dungeon crawl. As far as dungeon crawls go, it satisfies the need quite nicely. Pokemon fans may or may not like it. Basically, the player forms a "rescue team" with other Pokemon to go rescue their friends who have become lost in forbidding dungeons and similar places. Here's the neat part. Say you're the one who gets stuck in a dungeon somewhere. Can another Pokemon rescue team come and get you? Yes they can! Using wireless links and/or passwords, players can send out an SOS to get someone else with a copy of the game to come and rescue them and save them from having to start over in their quest. Pretty neat idea.
posted by Kyle Miller  # 4:05 PM 0 Comments