Folks who went to see Cloverfield got a tantalizing glimpse at the upcoming Star Trek movie, scheduled to hit the Theaters on December 25, 2008. Click here to visit the official website and see the trailer itself. An official press release has this to say about the movie:

Recently, I've been watching the DVD set of Star Trek Deep Space Nine and I have to say that I wish there was more of that on the large screen. There was more intrique, more development, more sense of huge fleets of deadly ships moving across the galaxy to change the destinies of planets and empires. Think back to the recent Star Trek films - how many ships were on the screen? Two or three. Compare that to "Way of the Warrior" (DS9 Season 4) where an entire Klingon fleet was battling the space station.

That is not to say that more ships on the screen makes for a better movie. There was a lot of tension that built up to the battle, so that when it finally arrived, you knew that this was a huge powder keg about to go off.

But what do I know? I'm just a cartoonist that's good at making games. But I know what I like. Time will tell.

Waiting for the DVD Reviews

In case you missed it, it's the cold and flu season.

I don't know about you, but if I tried to see all of the new movies when they hit the theaters, I'd quickly go broke. So I wait for it to come out on DVD and borrow it from my local library. So, without further ado, the first of my Waiting for the DVD Reviews: Spiderman 3 and The Santa Clause 3.

What do Spiderman 3 and The Santa Clause 3 have in common (besides main characters with a fondness for the color red)? Interestingly enough, both films have a character called Sandman. In Spiderman, he's a villain played by Thomas Hayden Church who is actually a living pile of sand. In the Santa Clause, he's the fellow who puts people to sleep and is portrayed by Michael Dorn (Star Trek's Mr. Worf).

You can say a lot of things about the direction of Spiderman 3, but one thing you can't call it is tight. The movie lurches along like a student driver who is still trying to figure out the clutch. It lurches, it stalls, gets moving for a bit, then stalls again. Over and over. For a movie about a crime-fighting superhero, the majority of the screen time in Spiderman 3 is focused on people without tights. The bulk of the movie seems to be dealing with Spiderman's alter-ego, Peter Parker coping with his mundane life. In fact, so much time is devoted to Peter not being Spiderman, the villains don't seem to be really developed very well. Perhaps if the writers had pared things down a bit and concentrated on one or two bad guys, the plot might have fared better. As it is, the fights between spiderman and the villains are brief and (in the case of Venom) we don't really get a feeling for who these guys are or why Spiderman should fear them. At least, not until Sandman and Venom gang up on Spiderman and pound the stuffing out of him while a large crowd of police, firemen, and assorted civilians watch (hey, anybody think of picking up a rock and throwing it?)

After watching that, I was in the mood for a comedy, which brings us to the second film in the review, Santa Clause 3.

The problem with G rated films is that the studios can't resist the urge to throw in lots of jokes, pratfalls and sound effects to amuse the kiddies. (To be fair, the sound effects are probably there so they can get away with the violence and still have a G rating). While Santa Clause 3 is not immune to this formula, they at least keep it to a minimum, trusting in the acting ability of the film's star performers. Tim Allen turns in the same performance he did in the first two films, as a man who is both convincing as Santa Claus, and still aware of his human failings. In this film he is joined by two other comedic actors, Martin Short and Alan Arkin. Unfortunately, Alan Akin just isn't given enough material to let his comedic talent shine. It may be just as well, because it would distract from the main story. Martin Short does a terrific job as the scheming Jack Frost, bent on getting a holiday of his own. Unlike in Santa Clause 2, where Tim Allen had to play against himself, Allen and Short work well together and I hope I'm not the only one who'd like to see these two together again (but let's make it a different franchise, ok?)

In summary, Santa Clause 3 delivers on the story it promises to tell and does so in an entertaining way. It's not as good as the first film, but just slightly better than the second one, simply because of Short's contributions.

Hey, more DVD's on my shelf. Maybe I'll write some more of these.

Chances are, you may have seen some of the products from Popcap Games and (if you haven't tried them already) may wonder what it's all about. Popcap uses a tried and true formula of making little, addictive games that are fairly easy to learn and hard to stop playing.

One such game is Insaniquarium. On the surface, it looks pretty simple. You have an aquarium and as long as you keep your fish fed, they'll help you earn money. You use that money to purchase new fish and upgrades. So far, so good. Did I mention the aliens? Yes, it seems that aliens see your peaceful aquarium as the only thing that stands between them and world domination. If you're not vigilant, the evil creatures from another dimention will kill all of your fish and you'll have to start over. Fortunately, you have a laser zapper that you can use to disintigrate those nasty aliens and let your fish live and grow.

You can play the game for free on the Popcap website or you can download a trial version. The full version not only lets you play through all of the levels of the game, but also includes a virtual aquarium and screen saver which you can set any way you like (in case you're sick and tired of the aliens, for instance).

This week's cartoon is based on personal experience, though I'm sure we've all been there.

I've been playing several games recently and I hope to share some of those expereinces with you in the coming days, but first, I need to address some of the mail I've been getting lately.

First of all, I'm glad that you folks have found the contact me button and are using the comment form to share your thoughts with me. Some of these I just couldn't keep to myself. Here are some examples:

do you have some a-kicing cooking games

Those were the ones that made some sense. Most of the messages appear to have been made by some poor souls who are repeatedly banging their head or some other appendage on the keyboard:

I would love to help relieve these individuals of the pain they are feeling, but sadly, the affliction affects their ability to put in a legible email address, so until we figure out a way to contact these folks, they will have to suffer in silence.

Well, enough about that. Keep those cards and letters coming!

So what did everybody get for Christmas? As you can see, GC got a new game. 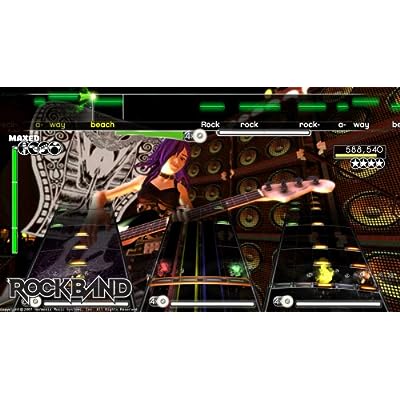 This is not a review so much as a commentary on the latest music and rhythm game, Rockband. It was developed by the same folks that brought us Guitar Hero, so there are a lot of similarities between the two games. So let's talk about the differences. Up to four people can play Rockband at the same time, and not all of them have to play the guitar. The game is bundled with a guitar, microphone, drumkit and a four-port usb hub so one can use all of those devices on the limited ports of the XBox 360. Folks who have purchased Guitar Hero needn't fret, as the game is designed to work with those peripherals as well.

One of the big differences in gameplay is "solo" mode where you can strum, wail or otherwise rock til you drop without worrying about missing a note. Solos come at appropriate moments in the song where you can really show off and impress the fans.

I may be exagerating just a bit in my cartoon - all of those artists are represented in that game and can be heard performing their greatest hits. Over 50 tracks in all. And not all of the songs hit the top 25 charts decades before today's teens were born. But hey, I gotta get my jokes from somewhere, right? But seriously, a lot of these songs will resonate more with the gamemaker's generation than the kids that are playing this game.

As to the reason why this isn't an actual review - I haven't had a chance to play the game yet. And if things continue, it may be a while before I get the chance. Good thing I've got other things to occupy my time. Rock on, dudes!

Talk amongst yourselves (Open Thread)

Shortly after Christmas, some enterprising individual made a spam bot that would automatically search for email comment forms (like the one on my site) and use it to send data. Presumably, the same individual made this bot available to the hacking community and I found myself deluged with comments. A great majority of these comments were nothing but gibberish, made by folks who just like to mess with things. Many more were in a foreign language. A small amount were in English, but even those made little if any sense. I am not going to take the bait of any of these fishing expeditions. Until I come up with a means to verify the sincerity of the message and the messenger, the messages are being shunted off to a dead letter file where I can scan and delete at my leisure.

However, for those folks who truly want to get in touch with me, leave a message here and I'll respond to it here or (if you're lucky) via email.

Other topics for discussion - why do people get such pleasure out of digital vandalism of this sort?